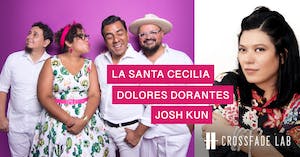 The eighth edition of Crossfade LAB will stage a special meeting between celebrated Grammy-winning Los Angeles band La Santa Cecilia, and Mexican poet, journalist, and writer Dolores Dorantes. Moderated by cultural writer and MacArthur Fellow Josh Kun, the evening will follow words and music across the verses and line breaks of the Americas, from Olvera Street to Ciudad Juárez and El Paso, and from celebrations of love and family to the violence of war, separation and disappearance.

Crossfade LAB is an event series organized by CALA Alliance that presents thought-provoking conversations and performances with internationally known Latinx and Latin American artists. It takes its name from a DJing technique of crossing and merging two music tracks into one new “mixed track.” Crossfade LAB presents the work of artists who work at the intersection of multiple identities, cultures, politics, languages and at forms, and whose artistic practice is in dialogue with Arizona and the social issues of our time.

Crossfade LAB is organized with generous support from the Diane & Bruce Halle Foundation, and in collaboration with Crescent Ballroom and ASU Art Museum.

La Santa Cecilia started their career by serenading passersby on Los Angeles’ historic Olvera Street, and have since become a musical phenomenon that defies musical and cultural boundaries. With captivating songs about love, loss, and social justice struggles, the band has become the voice of a new bicultural generation in the United States –fully immersed in modern music but still close to their Latin American influences and Mexican heritage. In 2014, La Santa Cecilia won a Grammy for Best Latin Rock Album, Alternative or Urban for Treinta Días. Their seventh album will be released in the fall of 2019.

Dolores Dorantes is a Mexican poet, journalist, and writer living under political asylum in El Paso, Texas. She has published nine books of poetry and prose, most recently The River/El Río (2018), a collaboration with the photographer Zoe Leonard; Style/Estilo (2015); and, Intervenir/Intervene (2015). Her work has been translated into English, French, Dutch, German, Portuguese, Slovenian, Bengali, and Swedish. Dorantes is a priest in the Mahajrya Buddhist tradition. She is also a performer and bookseller working out of her mobile bookstore Librería Feminista, and the organization Cielo Portátil (for a free education).

Josh Kun is Director of the Annenberg School of Communication at the University of Southern California. A cultural historian, curator, journalist, and MacArthur Fellow, he writes and researches about music and the politics of cultural connection. He is the winner of an American Book Award (2005) and a Berlin Prize (2018). In work that spans academic scholarship, exhibitions, and performances, Kun unearths and brings to life forgotten historical narratives through finely grained analyses of material and sonic manifestations of popular culture. He complicates our understanding of the evolution of racial and ethnic identity in America in works such as Audiotopia (2006), and the co-authored And You Shall Know Us by the Trail of Our Vinyl (2008). Kun is co-curator and host of Crossfade LAB.